“Give me liberty or give me death!”

For those of you who were not listening during American History class, that was the compelling end to Patrick Henry’s infamous speech. He urged colonial Americans to prepare for battle and fight for freedom from British rule, proclaiming that he would not settle for anything less than what he believed the people deserved: independence. Thus began the Revolutionary War.

…we all experience a moment in time when we need to make a declaration of independence in our own lives….

As the thirty of us sat patiently waiting for the bell to ring, Mr. Palmer did his best to capture our attention with tales of battle and determination. In my case, I can say with confidence that our hard-working instructor’s effort had no effect. When I was in high school, I had no interest in learning about notions like truth, liberty, and freedom of speech…because it had nothing to do with me. I couldn’t relate to this kind of struggle. But the irony is that we all experience a moment in time when we need to make a declaration of independence in our own lives. This requires the individual to take ownership of the present reality and maintain responsibility for the direction he or she wants to go in the future. It is a daunting task, and a very long road, but it begins for each of us at a young age.

Much of my early days in high school were marked with a distinct kind of darkness and uncertainty, but I was fortunate to have an ally.

For me, the road to self-declaration began in high school. Much of my early days in high school were marked with a distinct kind of darkness and uncertainty, but I was fortunate to have an ally. As part of my individualized education plan, I was assigned a speech therapist. She was tasked with the job of strengthening my facial muscles, and for this effort, she would often take time to observe my natural speech patterns. We would talk about all things related to life and the future, and over time, my speech therapist seemed to understand me better than anyone else. She recognized my potential and made it known to all who were involved in shaping my future…

…speaking up for truth may lead to a battle, but it is the only way to freedom…

Eventually, that role would become my own responsibility. Speaking up for what we believe to be true about ourselves is not something that can be conveniently delegated to another person. But I can testify that I would not have found my truth without being cast in the light of someone I admired.

So, if you’re taking notes, make sure to include that Patrick Henry taught us that speaking up for truth may lead to a battle, but it is the only way to freedom… You will be tested on it later. 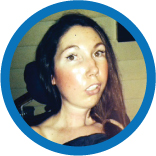 Anna is a writer and advocate – check out her blog: Anna Works…Let’s talk about employment, empowerment, and disability. She holds a Master’s of Science degree in Rehabilitation Psychology from UW-Madison.
More about Anna…
More Blog Articles by Anna